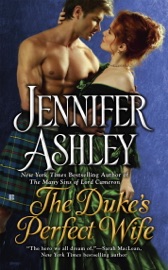 Lady Eleanor Ramsay is the only one who knows the truth about Hart Mackenzie. Once his fiancee, she is the sole woman to whom he could ever pour out his heart.

Hart has it all--a dukedom, wealth, power, influence, whatever he desires. Every woman wants him--his seductive skills are legendary. But Hart has sacrificed much to keep his brothers safe, first from their brutal father, and then from the world. He's also suffered loss--his wife, his infant son, and the woman he loved with all his heart though he realized it too late.

Now, Eleanor has reappeared on Hart's doorstep, with scandalous nude photographs of Hart taken long ago. Intrigued by the challenge in her blue eyes--and aroused by her charming, no-nonsense determination--Hart wonders if his young love has come to ruin him . . . or save him.