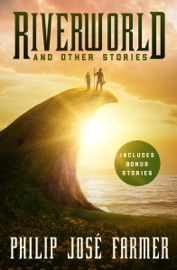 Riverworld and Other Stories

Three stories of a world shared by resurrected humans from all times and places—plus ten more tales by the Hugo Award–winning author of the World of Tiers series.

On author Philip José Farmer’s Riverworld, humans from every era and culture have been simultaneously resurrected. Ancient Hebrews, medieval warriors, Spanish Inquisitors, and modern Americans intermingle in this strange new environment, but many still cling to old prejudices.

Tom Mix, a silent-film star originally from early-twentieth-century Earth, is journeying among the vast population along the millions of miles of the River, in search of familiar faces from his own time. He’s been traveling the River for five years and believes people are starting to change. But when he’s entangled in a brutal clash between states, he discovers that some are slow to let go of the ideas that ruled them on Earth.

This volume includes the novelette “Riverworld,” along with two additional Riverworld tales and ten other short stories, all strange, clever, and profound. Farmer’s explorations of the wonderful and bizarre—from a portrayal of Jesus and Satan as cowpokes to a reimagining of Edgar Rice Burroughs’s Tarzan in the style of William Burroughs—plunge the reader into “one of the most imaginative worlds in science fiction” (Booklist).

This ebook includes“Riverworld,” “J. C. on the Dude Ranch,” “The Volcano,” “The Henry Miller Dawn Patrol,” “The Problem of Sore Bridge—Among Others,” “Brass and Gold (or Horse and Zeppelin in Beverly Hills),” “The Jungle Rot Kid on the Nod,” “The Voice of the Sonar in My Vermiform Appendix,” “Monolog,” “The Leaser of Two Evils,” “The Phantom of the Sewers,” “Up the Bright River,” “Crossing the Dark River,” and Philip JosFarmer’s article on the making of Riverworld, “The Source of the River.”